Small and Efficient is Interpreted as Voluminous and Open

Midcentury Modern Homes are often hidden and never seen in remote neighborhoods or obscured by the landscape of the site. Here is a 2,000 square foot midcentury modern home found in Dallas on a very prominent neighborhood street. 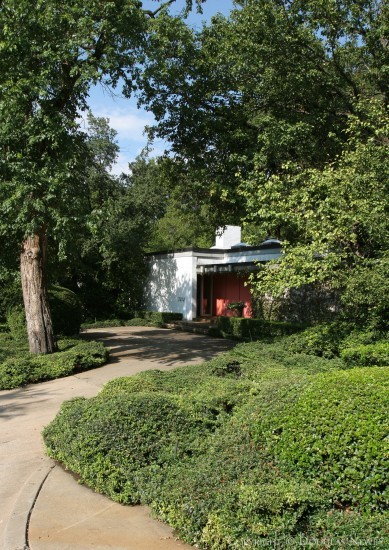 Architect and artist Glenn Allen Galaway designed this modern home as his own residence and studio. Remarkably, it is architecturally demure and respectful, at the same time it is architecturally bold and dramatic. This modern home is demure – set back on the site and fully integrated in the rich landscape of the setting. It is bold – a simple structure, with a dynamic design so tightly organized that it seems to “explode off the page,” exuding energy and becoming a visual magnet just as a sculpture would in a park. 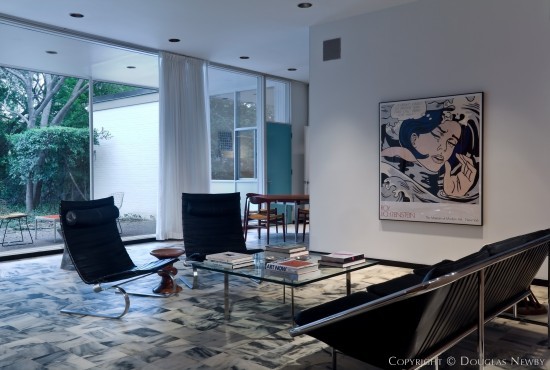 Glenn Allen Galaway’s friendship with Philip Johnson and the recipient of his architectural influence is apparent from the large public room with a wall of glass doors and glazed openings to the rear garden. The scale of the home and the transparent wall are reminiscent of Philip Johnson’s Glass House. It was a space where the cultural leaders of Dallas, artists, museum directors, professors, art historians, and designers convened socially.

Successful midcentury homes, often small, have efficient space. Glenn Allen Galaway designed a home with no extraneous space, but increased the volume of the rooms with tall ceilings and visually expanded the rooms with full length windows looking into view gardens.

The detail is spare and elegant. The built-in modern classroom desks, study desks and drawers are sleek and inviting.

The 105 foot width of the lot allows for an additional 2,000 foot structure to be built on a hidden corner of the rear garden, minimally connected to the original house, which will also enjoy full views of the garden.

The American Institute of Architects Dallas Chapter identified this midcentury modern home as the finest midcentury modern home in University Park, and it is one of the finest midcentury modern homes in the U.S. This Glenn Allen Galaway home was first recognized by a committee comprised of the city’s most knowledgeable patrons, professions, and civic leaders in art, architecture and design, including the presidents of the organizations and museums dedicated to art, architecture and design. This committee surveyed the city and identified 50 significant homes to celebrate the 50th anniversary of the Dallas AIA Chapter. During the last year, the AIA Dallas Chapter awarded this home its rarely bestowed 25 Year Award for a home that is at least 25 years old and continues to inspire.

2 Responses to “Midcentury Modern Home – A Triumph of Small”